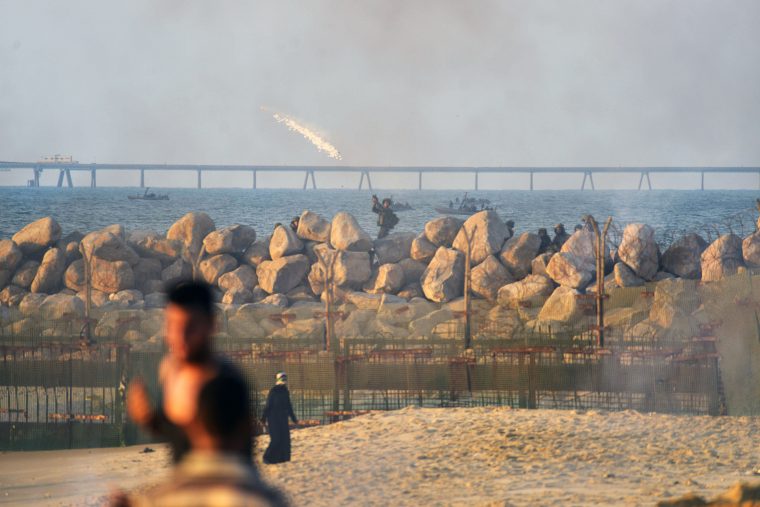 Israeli soldier fires tear gas at Palestinian protesters, during a demonstration against the decade long Israeli siege over the Gaza Strip, near the maritime barrier between Gaza and Israel, on the Northern part of the Gaza Strip, September 11, 2018. Photograph: ActiveStills

The MB1215DE is a state-of-the-art mobile container scanner manufactured by the Chinese company Nuctech. It uses high-energy imaging technology to detect contraband goods concealed within shipping containers. Due to its rapid throughput—up to twenty-five containers per hour—it is now part of the standard equipment of the world’s busiest ports, including those in Dubai, Taipei, Tangiers, and Rotterdam. It is also in operation at a lesser-known logistical hub: the Kerem Shalom terminal, on the border between Israel and the Gaza Strip.

Through this particular piece of infrastructure, an uncanny symmetry appears between zones of maximum circulation (that support global trade) and zones of maximum confinement (of which Gaza might be the world’s most infamous example). In the first instance, the container scanner functions within a security apparatus that is tasked with maximizing the flow of goods while preventing threats to the trade order itself. In the second instance, it contributes to a different security operation: minimizing the flow of goods while preventing the complete collapse of the hostile territory under blockade. High-resolution, real-time monitoring, and control are essential to both operations.